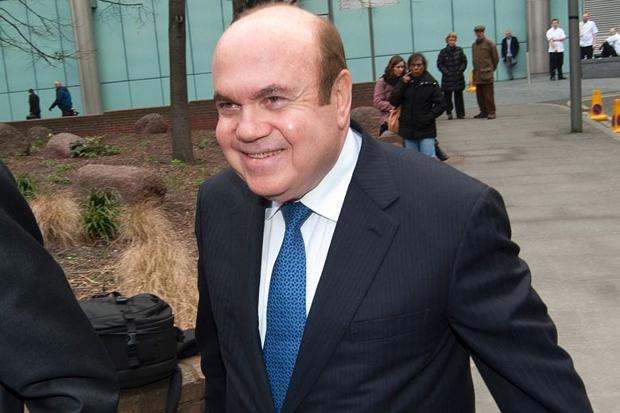 A billionaire metals magnate with links to Tony Blair and Lord Mandelson was acquitted of bribery charges yesterday after Britain’s white-collar crime-fighting agency pulled the plug on a landmark prosecution.

Victor Dahdaleh, 70, walked free from court after it emerged that key witnesses for the Serious Fraud Office had a potential conflict of interest.

The collapse of the trial is a huge embarrassment for the SFO, which has been trying to rebuild its reputation under David Green, who took over as director last year.

Mr Dahdaleh was accused of paying £40 million in bribes to senior officials at Aluminium Bahrain (Alba), one of the world’s biggest aluminium smelters, to secure raw materials contracts worth £1.7 billion for companies that he advised. He admits making the payments but has always maintained that they were not corrupt. He has consistently denied any wrongdoing.

Outside Southwark Crown Court yesterday, Neil O’May, Mr Dahdaleh’s lawyer, said that his client was “overwhelmed and relieved” by the decision and was “looking forward to getting back to his business and his life”.

The SFO had obtained documents from Akin Gump, an American law firm that is advising Alba on a separate but related court action against Mr Dahdaleh in the United States. The agency then called two Akin Gump lawyers to appear as witnesses in the British trial, but they refused to do so if they could not restrict the questions that they would be asked in cross-examination. It is understood that they wanted to avoid prejudicing attorney-client privilege in the American case.

Mr Dahdaleh’s lawyers said that they should be allowed to cross-examine the two American attorneys without limitation, to ensure that they had no ulterior motives for appearing as prosecution witnesses in Britain while also advising Alba in the American case against Mr Dahdaleh.

Their refusal to attend court without restrictions meant that “unfairness now exists for the defence”, Philip Shears, QC, said yesterday on behalf of the SFO. “After careful consideration . . . the [SFO] has concluded that there is no longer a realistic prospect of conviction. . . and accordingly we offer no evidence.”

Mr Shears said that a third witness, Bruce Hall, a former chief executive of Alba ,who has already pleaded guilty to one charge of conspiracy to corrupt, had altered his evidence “significantly” from his original witness statement.

Judge Nicholas Loraine-Smith directed the jury to return not guilty verdicts on all eight counts against Mr Dahdaleh.

A spokesman for Dominic Grieve, the Attorney-General, said that Mr Grieve “has every confidence in the ability of the SFO to deal with large, complex frauds”. The spokesman added: “The Attorney-General was fully briefed and understood the decision by the SFO to [withdraw its prosecution]. It is in the nature of such cases that matters can arise that could not be reasonably anticipated.”

The case had been teetering on the edge since Thursday, when Sasi-Kanth Mallela, an SFO lawyer, revealed Akin Gump’s involvement. This prompted behind-the-scenes deliberations between the judge and the trial lawyers about a potential conflict of interest. Mr Green telephoned the chairman of Akin Gump in an unsuccessful attempt secure the appearance of the American lawyers.

The Dahdaleh case has been mired in controversy. The start of the trial was delayed when two solicitors from Allen & Overy, Mr Dahdaleh’s original law firm, were removed from the case after the court heard allegations that they pressurised a prosecution witness. Last week, the court was told that a Bahraini government minister had written to Mr Grieve last year saying that Mr Dahdaleh’s payments had been approved by Alba’s board.

The agency is still reeling from its bungled prosecution of Vincent and Robert Tchenguiz, the property tycoons, who are suing the agency for £300 million.

Mr Dahdaleh kept close to Labour throughout Mr Blair’s premiership. The then Prime Minister spoke at events hosted by Mr Dahdaleh, as did Lord Mandelson, the former Business Secretary, who once introduced the metals magnate as “Victor, my friend . . . a business dynamo, a public-spirited figure and a big-hearted personality all rolled into one”.

Mr Dahdaleh hosted lunches with Alan Johnson, the former Home Secretary, and Tessa Jowell, the former Olympics Secretary. He donated £15,000 to the Institute for Public Policy Research, a Labour think-tank, and an undisclosed amount to Policy Network, a think-tank set up by Mr Blair and previously chaired by Lord Mandelson. Mr Dahdaleh has also donated $1 million to Bill Clinton’s charitable foundation.