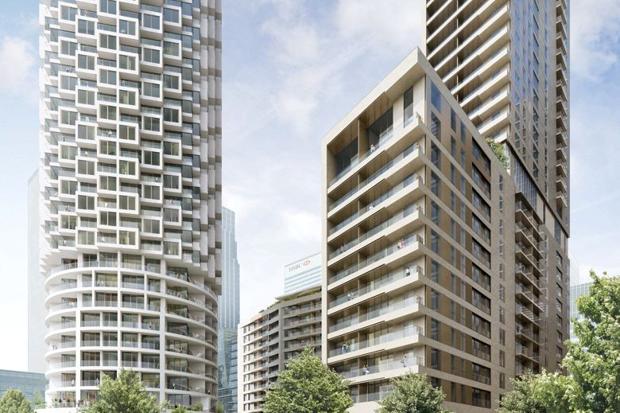 Sharp-suited bankers and lawyers will soon be rubbing shoulders with more casual, fashion-conscious types as Canary Wharf Group sets out to lure technology, media and telecoms workers to a vast Silicon Valley-style hub.

The largely semi-derelict area is about a third of the size of the Canary Wharf estate and is one of the biggest waterfront sites in London. Under the plans, it will be dominated by 3,100 residential units, including a 57-storey luxury tower, and will boast two parks, two squares and a kilometre of dockside boardwalks. Affordable housing will also be built.

In stark contrast with Canary Wharf and its skyscapers housing some of the world’s biggest banking names, Wood Wharf on the Isle of Dogs will have predominantly low-rise commercial offices “more akin to the South Bank around the back of the Tate Modern”. Unlike Canary Wharf’s underground shopping centre, 100 new shops, restaurants and cafés will be “brought up” to street level. Other plans include two hotels, a primary school, a sports hall and a healthcare centre.

Robert Maguire, the project director for Wood Wharf, said that the planning application had been “primarily driven” by changes in the London property market, which had led to a demand for residential buildings rather than large office space. However, he said that it had also been designed to lure technology, media and telecoms businesses.

“With all the recent development around Shoreditch [in East London], there is not a lot of space on the City’s fringe for growth,” he said. Wood Wharf would be a “natural” hub for those companies to migrate east. The technology, media and telecoms sector acquired 1.8 million sq ft of office space in the City in the first nine months of 2013, according to Knight Frank, 31 per cent of the total take-up. The financial sector acquired 800,000 sq ft.

In March Canary Wharf, which has about 7 per cent of tenants in the “TMT” sector, opened space in Canada Square for start-up technology companies. That space is now full.

The commercial buildings are set to be completed by 2018 to coincide with the arrival of Crossrail, the east-west London train line, and negotiations have begun with potential tenants.

The first phase will include 884 residential units in three buildings designed by Herzog & de Meuron, whose recent work has included collaborations with Ai Weiwei, the Chinese artist, on the design of the “Bird’s Nest” Olympic stadium in Beijing and the Serpentine Gallery Pavilion in London’s Kensington Gardens, and Stanton Williams, whose projects include the development of King’s Cross Square. Phase one will also include two office buildings designed by Allies and Morrison.

If planning permission is granted, construction on the first site is due to start late next year. Up to 17,000 new jobs are expected to be created.